January 19th, 2018 at 9.30am in Room CC 103 C will mark the ‘first time’ Beach Soccer will be introduced as an educational session at the prestigious United Soccer Coaches Convention (formerly the National Soccer Coaches Association of America, NSCAA).  The United States Youth Soccer Association (USYSA) has sponsored this event with the understanding on how it can quickly help the development of players, but also  because it is clearly understood how much joy it brings to those who play.  Pro-Am Beach Soccer is very proud to be presenting this session for both USC & USYSA.

This session will focus on Beach Soccer as a tool to make players better.  It will include a review of the rules, the importance of the goalkeeper (most important player), as well as a progression training focusing on the build up to the 5 v 5 competition.  Some time will also be allotted to the biggest development in the past ten years for the game, the overhead kick.  The protection (much like posting up rules in basketball) of the kicker and his ability to lift the ball to himself for the overhead, or otherwise known as,  bike-kick is an actual statistic kept!  With the support of Beach Soccer World Wide providing some valuable curriculum material this should be a great introduction for new and experienced beach soccer prevalers.

Last spring the FIFA Beach Soccer World Cup was staged in the Bahamas.  The event marked with the largest participation of teams in its history was a great festival shared at the same time with the countries Carnival.  Zvonimir Boban, the former Croatian Super Star footballer, and current Deputy Secretary General of FIFA, was in attendance at the event which was his first time being exposed to the game.  He was heard discussing how amazed he was by the lively fans, entertainment value, but most notably his feeling Beach Soccer lends itself to even better development opportunities for players than futsal.  That said, we understand both are equally important to giving players new challenges to improve themselves.

In 2006, and until 2009, Mr. O’Sullivan was asked by Roberto Ceciliano to come on as an assistant coach for the US National Team.  During this time the USMNT saw one of its most successful periods on the beach winning 2 CONCACAF Championships over Mexico, beating Uruguay in 2007 in a CONCACAF vs. CONMEBOL Championship in Acapulco, Mexico where each champion faced off in the ultimate championship. 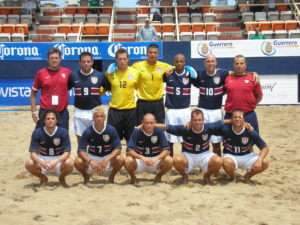 In the two World Cups they participated the team did not make the second round but had highlights worth mentioning.  In 2006, grouped with Brazil, and fabled coach Alexandre Soares, they were the only team besides Portugal (4 goals) who scored more than 2 goals against the eventual World Cup Champion.  The six goals scored by the USMNT was the most before or after for years outside of the efforts of Portugal who the following year scored 7 against Brazil.

In 2007, it was a year in which was remembered as the USMNT played against Iran in which the team captains (Francis Faberoff, USMNT), who are both now coaches for their respective teams, shared flowers and a sign of peace within sports for the world to observe.  It also marked the USMNT narrowly missing reaching the second round after being put into the group of death with Portugal and Spain both of which were champions by their own right in Europe.  The team missed out on the last second of the last play of a grueling match against Portugal.

Now the hope is to bring the level of education of the game to coaches at USC to be able to progress the game and be part of this call to “Revolution” in US Soccer.  Beach Soccer is a brilliant medium of the game and exposing younger players will not only help them become more confident and skilled, but will give an outlet for coaches when their players may be burning out.

There are two things certain about Beach Soccer.  One, there is a reason why FIFA declares this brand as “The Celebration of the Beautiful Game” and second, there is a reason why “Brazil is Brasil”.  Attend the session in and begin to understand how you can make your players love “The Beautiful Game” even more after playing in the sand.  Hope to see you in Philly and share this opportunity with you friends, parents, and coaches.

New events this year for PABS will be found in San Diego, Galveston Island, Boston, & Atlantic City.  Watch out for the announcements, and get your players ready to get their feet in the sand!