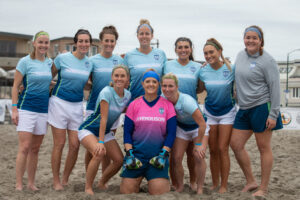 As featured in the Beach Soccer Worldwide article (See Article) 0n January 4th, 2019 it was to be the year of the woman in the world of beach soccer.  The women at the US Beach Soccer National Championships (USBSNC) felt as though this came true when they got together for a lively social on Saturday, December 7th, 2019.  The event featured over 2 dozen female national team players from the USA, England, Netherlands, and Canada.  It was the night before the Semi’s & Final and they reveled in the accomplishments within the women’s game.  Everyone left with a sense of purpose for the future of the game.

This year we not only saw a cash prize offered for the first time at the Virginia Beach event but for the first time anywhere on the planet the women competed for the same prize money as the men at the USBSNC.  This is a long way from playing second fiddle to the men’s pro divisions throughout the world.  The excitement in the room was energizing. 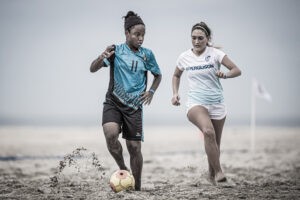 In attendance was not only the US Women’s Beach Soccer National Team coach Francis Farberoff but also the pioneer for the women’s game in The Bahamas, much-acclaimed coach, Luiz Escobar.  Coach Escobar is known for his days working with Brazilian legend Alexandre Soares as well as being the head coach of Botafogo of Rio Janeiro, who dominated the Oceanside, CA event just a few years ago.  His attendance affirmed The Bahama’s direction.

Also in attendance was the found of USBSNC, Pro-Am Beach Soccer, and NorCal BSC, Tighe O’Sullivan.  He spoke about the achievements the women’s game saw, but more importantly how they needed to continue to fight the false narrative of coaches and directors who are shielding players from what everyone in the room knew as the best path for quickest development.  It’s not just about the growth of the men’s or women’s, but of the sport from the earliest ages to the coaches and pro’s in attendance on this exciting night. 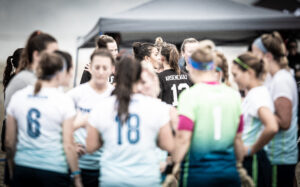 This year marked the first-ever international experiences of several women’s national teams including the United States and The Bahamas which took part in the qualifications of the first-ever ANOC World Beach Games.  The qualifier which took place in El Salvador gave each country its first look at the world stage.  Mexico and the USA advanced to Qatar and competed against the best in the world.  It was an amazing experience for anyone who was able to attend.

Only a week after the World Beach Games took place the first-ever World Winners Cup took place in Alanya, Turkey.  This year’s runner-up at the USBSNC, NorCal Women’s BSC, took part in the October event facing off against four of the ten best teams in the world.  The #1 team in the world WFC Zvezda was faced in their first game and last.  This team as the Russian National team beat the USA the week before 3-1.  But, in this competition, NorCal lost both times in overtime.  Once from shots from the mark, and in the Consolation match for 3rd place in overtime after giving up a goal with 30 seconds left in regulation.  NorCal BSC is now ranked 9th in the world and looking to improve on that mark. 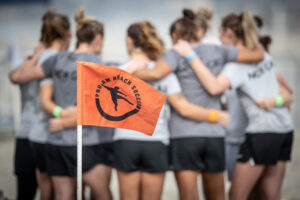 Overall the women at the social in San Diego were inspired and motivated to take their game and the sport to a new level in 2020.  We are sure the ladies of beach soccer will continue to strike not only the mark on goal but also the hearts and minds of those who will soon fall in love with this amazing sport.  There was a sense of what’s coming after the official year of the Woman in Beach Soccer concluded with Shoreline BSC winning the final in Shots from the Mark over NorCal BSC in the final’s that next day! We are looking forward to next year’s event to also take place in San Diego.  This time the event will take place in early November to avoid the pitfalls and difficulties associated with high school soccer and their coaches’ grip and threats upon their players to stop them from participating.  It was the greatest surprise in a year that otherwise was highly successful in seeing the sport grow in the United States.